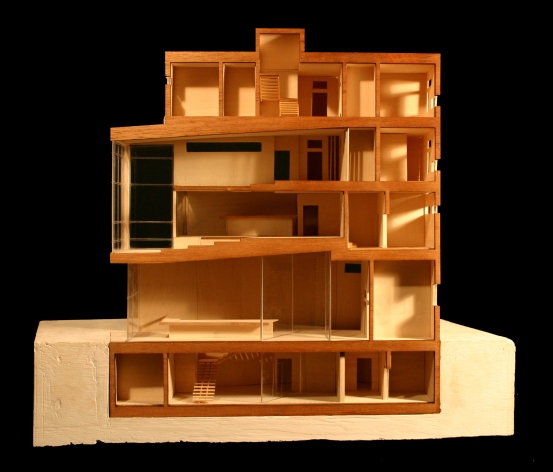 Strategy:  The Moth is dedicated to perpetuating the act of storytelling. Part of their mission statement reads, “we celebrate the ability of stories to honor the diversity and commonality of human experience, and to satisfy a vital human need for connection.” As stories connect individuals to each other and the community at large, the parti is based on two concepts: intermission (connecting program elements within the building) and intromission (connecting the building and its mission to the community at large).

As a result of its location at the confluence of two distinct gridded systems underneath the Brooklyn Bridge on Old Fulton Street, the site was irregularly shaped.  Drawing regulating lines from contextual geometries, an ordering orthogonal form was identified.  Leftover spaces were utilized for light wells and circulation to facilitate intromission.

A double-glazed facade reflects light during the day but becomes transparent at night when lit from within to express the building’s dual identity as office by day and venue by night.  Exterior terraces at multiple levels are colonized at night, further enlivening the building and projecting its program to the street and neighborhood.